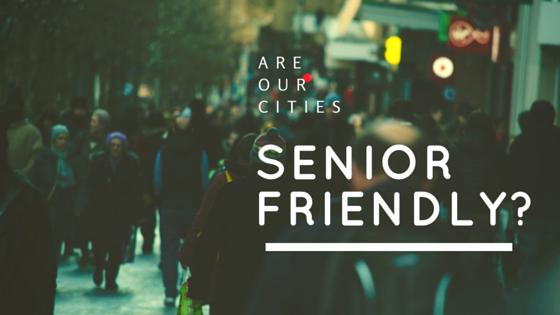 While taking public transport to work, driving to the store, or taking a morning walk with your dog, did you ever stop and think about the way our cities are designed? Or, to be more exact, for whom?

We keep hearing about the world’s metropoles such as New York, London or Tokyo being the ultimate centres of energetic life for the young and successful. But the reality is in fact that over 14% of North America’s population is over 65 (almost 17% in Europe), and the number will keep growing.

On a daily basis we encounter various things that we as healthy adults don’t even notice. But they can be great obstacles to older people. Whether we’re talking about mobility barriers, safety threats or the often limited options for socialization, travelling and other activities.

If it never crossed your mind, don’t worry. I’m writing this blog to inform and inspire, and if it does its job and gets you thinking about your surroundings from a new perspective, I’m happy to hear that.

Luckily enough, there are many people who made it their job to adjust our cities to become more senior-friendly. I’m delighted and relieved to see that these people think of advancement and innovation, and keep the old generations in mind while they’re at it.

In 2010, a research project called ‘Older People’s Use of Unfamiliar Space’ (OPUS) showed the following results:

As disquieting as that is, however, according to the same research, senior citizens themselves are becoming more and more engaged in the urban planning and redesigning process, so that their needs can be heard and addressed. Old people nowadays are very aware of their important role in society and are therefore becoming more politically engaged. Maybe you have noticed some changes in public spaces in your area, such as public transport stops, public toilets or other, nuanced modifications that are suddenly popping up in order to make the city life more enjoyable and less challenging for seniors. These efforts are still in their infancy, but the great news is that the need for elderly urban planning is being recognised worldwide. Some of the examples include the city adaptation project in Dijon, France (it’s not just about the mustard!) or the Singapore Housing & Development Board’s urban redevelopment tool iPLAN.

If you’d like to learn more about the topic of senior-friendly urban planning, you should definitely read David Lee, PhD.’s work ‘Designing Cities for the Elderly’ from the Massachusetts Institute of Technology, Dept. of Urban Studies and Planning (https://dusp.mit.edu) or Marcello Martinoni’s work ‘Criteria for the elderly people city? Simplify the complexity to act in concrete terms’ from the Institute for the Contemporary Urban Project, Accademia di architettura of the Università della Svizzera italiana (https://www.arc.usi.ch/en).