Heat Protection (not only) For Seniors 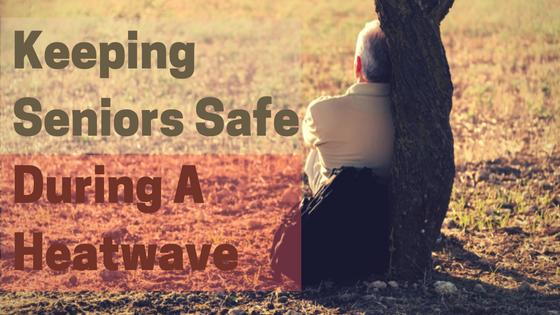 Heat Protection (not only) For Seniors

It’s a sweaty one, this summer. It brought us some major heatwaves in June, and there are surely still a few yet to come. It imposes a significant risk to the general public as such, but especially to children, the elderly, and to seriously ill people. In the big cities where the heat doesn’t get any cool-down from the greenery, it can really become a silent killer.

To quote the CDC:

Extreme heat caused 7,415 heat-related deaths in the United States from 1999 to 2010. Extreme heat kills more people than hurricanes, floods, tornadoes and lightning combined, according to the National Weather Service. In 2001, 300 deaths were caused by excessive heat exposure.

The number of deaths and emergencies caused by insufficient heat protection is alarming; especially because the rules to follow are so simple. Knowing them is all it takes. Read on, you could save someone’s life!

During a heat wave, it is imperative that everyone increases their water intake. Avoid alcoholic and highly caffeinated drinks, but also sodas of all kinds — they all dehydrate you, and relying purely on those during the hot summer days is a mistake. Even at low activity levels, everyone should drink more. Also, no waiting until you get thirsty! Being thirsty is a sign that it’s already too late.

If there’s a limitation to the amount of water a senior can drink due to an illness, consult your doctor for special instructions on how to handle the heat.

Make sure that seniors are spending time in a well air-conditioned space. If they don’t own an air conditioner themselves or refuse to use one, at least take them somewhere with cooler temperatures such as shopping malls or other public places. But be careful: it is only recommended to move outside in early morning or late evening hours, due to the heat in the streets during the day. Should the need arise to go outside during the day as well, pay attention to point 6.

Watch what your relatives do during the day, and help them adjust to the limited options during the duration of the heat wave. No unnecessary walks or shopping that could end up in a heat stroke or a collapse. Try offering them an air-conditioned car ride or hiring a caretaker to help them with their daily chores.

This is an excellent way to keep an eye on your friends, colleagues and relatives. Make a network of people who will be checking on each other regularly during a heat wave emergency, so that whenever someone starts showing signs of being unwell or stops responding, you immediately know something’s up and can offer help in a timely manner. Make a watch schedule for elderly relatives, so that everyone from the family checks up on them at a given time of day.

Whether you’re unsure about your senior loved one’s well-being or safety during a heat wave, or if the medication interferes with higher liquid intake, or if there is any other concern whatsoever, always consult your local GP. The only stupid question is a question not asked, and the doctor is there to offer advice and solutions — including any heat related health risks.

Elderly people are less likely to spot a slow temperature change and they often tend not to be able to adjust their outfits accordingly. Give your parents or grandparents a hand when choosing what to wear, make sure to pick light and breathable materials. They should also never leave the house without a hat, quality sunglasses and a strong sunscreen on, even when the sun isn’t shining directly. A sunburn would be just another undesired complication, not to mention the complementary risks such as painful blisters or maybe even skin cancer.

Remember, these are the simplest rules underlined by common sense, but for elderly people hot weather can be more dangerous due to their higher sensitivity and weaker physique. Therefore they do need a certain amount of supervision during the hot days. Don’t underestimate the risks and keep your relatives safe!